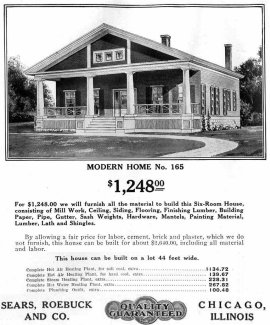 One of the legendary grandfathers of prefab homes was Sears and their "Modern Homes" offering. When it was sold 100 years ago it was modern but I doubt it would be considered very modern today. These were similar to panelized homes and had to be assembled by the buyer at the final destination. It was so successful that Sears sold over 70,000 of these pre built kit homes from their mail order catalogs.

Like today's manufacturers Sears tried their best to give the consumer as many options as possible. They had a selection of over 400 different designs ranging from small bungalows costing $450 to large two story homes priced at $4500. They even offered large school buildings that only cost about $12,000 much to the dismay of many children.

Sears was not the first to sell homes via mail order. They actually almost cancelled their plans around the turn of the 19th century. Luckily for them several other companies showed it could be done profitably and that there was significant demand. You can't blame Sears for doubting that people would want to buy a home through mail order. Its a hundred years later and it still is a little hard to believe. Sears was also helped by some new building material innovations. Homes used to require plaster walls which were expensive and required skilled labor. A hundred years ago drywall started to become widely available reducing the price and allowing for DIY installation. Asphalt shingles came along as well. This made roofing simple and saved money by not needing expensive skilled labor.

These kit homes did require alot of DIY construction when compared to todays' options. The typical Sears Modern Home was delivered in two railroad boxcars. These boxcars held tens of thousands of building materials. This included over 600 pounds of nails, 20 cans of paint, 15,000 asphalt shingles and most importantly a very detailed instruction manual.

The Great Depression hit the country hard and home sales dropped and never came back so Sears discontinued their Modern Homes. There are still many of the Sears Modern Homes that around today after all there were over 70,000 of them built.