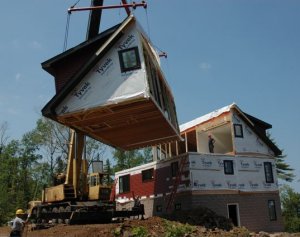 Modular buildings are essentially pre-fabricated buildings taken to a new and larger scale. The use of pre-fabrication goes back over a hundred years. It started gaining popularity very early in the 20th century. Sears Roebuck Co. sold over 500,000 pre-fabricated homes between 1910 and the 1940.

The end of World War II caused the modular market to truly explode and greatly evolve. All of the returning soldiers came back to America looking to buy a home and start a family. This demand for homes was greater than the marketplace could handle with the traditional building process. This led people to look for solutions to increase efficiency and lower the cost of new home construction. The modular building process answered both of these needs. There are still modular homes being used that were built in the 1950s. These early modular homes were much simpler than today's modular buildings.

In the last twenty years the sophistication has greatly increased with the pioneering work of assembling homes with overhead cranes that have capacity to lift 100 tons. This allowed for larger modules to be constructed and shipped cross-country. The only limitation is the size of each individual module due to the width of the road from the factory to the building site. Today's modular buildings normally consist of 3-6 different modules.

As the size of modular homes has greatly increased since the 1980s so has the customization options. You can now order a custom designed building that is created by an architect solely for you. The architects plans are then built with modular techniques and the final building is assembled to be as tall and as wide as you wish.

A few current examples of just how well accepted modular units have become, is that they were used in the construction of the new cruise liner Queen Mary 2. The Queen Mary 2 is the largest and most expensive cruise liner. The ship owners choose to use modular passenger cabins to ensure all cabins were built to the higher standards that are available in a factory environment, even their VIP suites utilized the modular building process. Modular buildings have also been used to construct McDonalds fast-food restaurants. It is estimated that almost all Americans have been in a modular structure. Since finished modular buildings look the same as traditionally constructed buildings, no one realizes they are in a modular building.